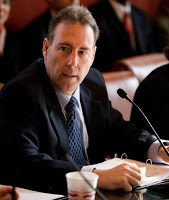 Forget the fact that New York State’s boundaries have been largely unchanged since the Constitution was ratified. That only two states have been admitted to the Union by splitting off from other states (Maine from Massachusetts in 1820, and West Virginia from Virginia in 1863). And that if the United States were to add a 51st state, the likeliest candidate would be Puerto Rico, or even the District of Columbia — not New York. State Senator Joseph E. Robach, a Republican who represents part of Rochester, has proposed legislation that would allow each of New York State’s 62 counties to hold a referendum in 2010 to ask voters this question: “Do you support the division of New York into two separate states?” The referendum – if it is even legal – would be nonbinding.

Upstaters always feel ignored in state and national politics, partially due to the fact that for the last century, every governor has been from the NYC area. The two-states idea, of course, has long been a dream in California, too.