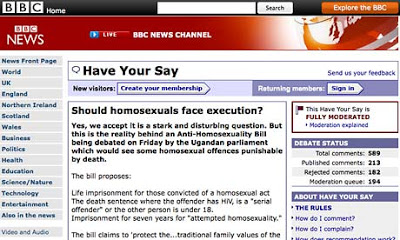 This is unfuckingbelievable. In reference to the Uganda “kill gays” bill, the BBC asked their readers if they agreed that gays should be put to death. From the Guardian:

The talkboard post asked users to send in their views to the programme, which goes out on the World Service and is also available online. “Has Uganda gone too far? Should there be any level of legislation against homosexuality? Should homosexuals be protected by legislation as they are in South Africa? What would be the consequences of this bill to you? How will homosexual ‘offences’ be monitored?,” the post added.

Premoderated posts included one from Chris, Guildford, posted at 8.59am, which attracted 51 recommendations of support. He wrote: “Totally agree. Ought to be imposed in the UK too, asap. Bring back some respectable family values. Why do we have to suffer ‘gay pride’ festivals? Would I be allowed to organise a ‘straight pride’ festival? No, thought as much!! If homosexuality is natural, as we are forced to believe, how can they sustain the species? I suggest all gays are put on a remote island somewhere and left for a generation – after which, theoretically there should be none left!” Another, from Aaron in Freetown, said: “Bravo to the Ugandans for this wise decision, a bright step in eliminating this menace from your society. We hope other African nations will also follow your bold step.”

The Africa Have Your Say programme aired at 4pm today. By 5.30pm, the headline of the discussion had been changed to “Should Uganda debate gay execution?”. Liliane Landor, the BBC World Service acting head of Africa region, defended the radio programme and talkboard post, saying it allowed gays and lesbians from Uganda, whose voices have never been heard in the UK, to talk with dignity about the impact the legislation would have on their lives. The show also included the opinion of those who supported the anti-homosexual legislation, including religious leaders, she said. “The programme was a dignified exchange between people who have differing beliefs,” Landor added.

Unreal. The BBC will be living this down for a LONG time.