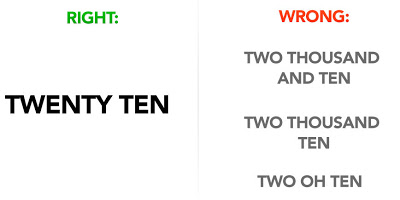 The language cops have set up a site demanding that you say the new year their way.

Say the year “1810” out loud. Now say the year “1999” out loud. See a pattern? It’s been easier, faster, and shorter to say years this way for every decade (except for the one that just ended) instead of saying the number the long way. However, many people are carrying the way they said years from last decade over to this decade as a bad habit. If we don’t fix this now, we’ll be stuck saying years the long way for the next 89 years. Don’t let that happen!