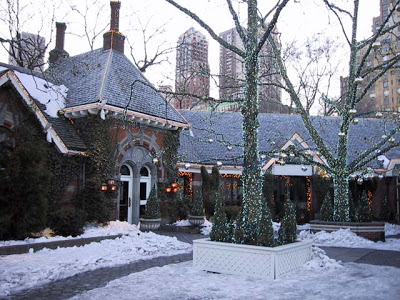 Tavern On The Green Closing Central Park’s Tavern On The Green, the nation’s highest grossing and arguably most famous restaurant, will close tomorrow after 75 years in business.

The former sheepfold at the edge of Central Park, now ringed by twinkling lights and fake topiary animals, is preparing for New Year’s Eve, when it will serve its last meal. Just three years ago, it was plating more than 700,000 meals annually, bringing in more than $38 million. But that astronomical sum wasn’t enough to keep the landmark restaurant out of bankruptcy court. Its $8 million debt is to be covered at an auction of Baccarat and Waterford chandeliers, Tiffany stained glass, a mural depicting Central Park and other over-the-top decor that has bewitched visitors for decades.

The city has awarded a contract to operate a restaurant on the premises to the company that owns the Loeb Boathouse, which is also in Central Park. Next month a court will decide on whether the new owners can use the Tavern On The Green name.