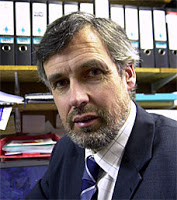 “The Bible calls for the ultimate penalty for sodomy (Lev 20:13) and for rape (Deut 22:25), and our Lord upheld the death penalty when He called for the accusers of the woman caught in adultery to cast the first stone (John 8:7) – if, that is, they were not implicated in adultery themselves. The contrast between our politicians and those of Uganda could not be more stark. A Parliamentarian in Uganda is trying to protect his nation’s children. The House of Commons of the United Kingdom is trying to corrupt ours. Which country is the more civilised, I wonder, in the eyes of Almighty God?” – British extremist Stephen Green, leader of the Christian Voice, endorsing Uganda’s “kill gays” bill.