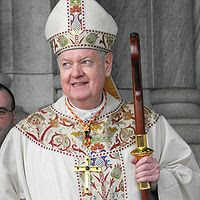 In an editorial about their October court victory in forcing the Catholic Church to turn over secret documents about the child molestation cover-up scandal, yesterday the New York Times noted the starkly differing reactions to such abuses by former New York Archbishop Edward Egan (pictured) and Dublin Archbishop Diarmuid Martin.

Absent in those pages is a sense of understanding of the true scope of the tragedy. Compare Bishop Egan’s words with those of the archbishop of Dublin, Diarmuid Martin, who, after the release of a recent report detailing years of abuse and cover-ups in Ireland, said: “The sexual abuse of a child is and always was a crime in civil law; it is and always was a crime in canon law; it is and always was grievously sinful. One of the most heartbreaking aspects of the report is that while church leaders — bishops and religious superiors — failed, almost every parent who came to the diocese to report abuse clearly understood the awfulness of what was involved.”