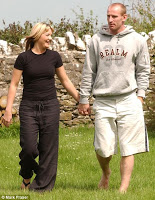 Out Rugby Star’s Wife: I Forgive Him Welsh rugby star Gareth Thomas, his nation’s most revered sports hero, came out publicly this weekend. In a lovely interview with the UK’s usually not-so-nice Daily Mail, his ex-wife says she forgives him for cheating with men and is proud of him for coming out.

“I’m incredibly proud of him for coming out and if anyone thinks any less of him because of it, then they are stupid. I know it was a massive relief when he told me, his family and close friends three years ago, and it will be even more of a relief now that everyone knows. He is now free to be who he is and I, and everyone else who knows and loves him, am happy for him because he is a very special person. I don’t feel angry, embarrassed or humiliated, nor do I regret marrying Gareth for a second. I know with all my heart that he adored me as much as I adored him on our wedding day, and I had the most fantastic years of my life with him. It would be easy to wallow in self-pity and dwell on the negatives, but I am a positive person and I’m grateful that he loved me so much he had to tell me the truth because he felt I deserved better. He released me and in doing so he released himself.”

Gareth Thomas is the most-winning and publicly adored sports star in Welsh history. His coming out is the Welsh equivalent of having Derek Jeter or Michael Jordan announce they are gay. And he is still playing. Amazing.