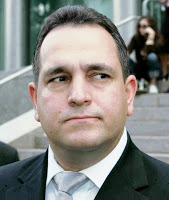 Yesterday a New York Senate committee report indicated that the expulsion of Sen. Hiram Monserrate may finally be in the works.

Senator Hiram Monserrate behaved recklessly and callously after his companion was hurt during an argument at his Queens home, failing to call 911, dragging her violently through a hallway and taking her to a hospital miles away, according to a State Senate committee investigating Mr. Monserrate. A draft of the committee’s final report concludes that Mr. Monserrate seemed to be as concerned with keeping the confrontation last December from becoming public as he was with the safety and health of his companion, Karla Giraldo, according to a person familiar with the report. The report also found that Mr. Monserrate, a Democrat from Queens, refused to take full responsibility for injuring Ms. Giraldo, said the person, who asked not to be identified because the report is confidential. While it is not yet clear what sanctions the panel may recommend for a vote by the full Senate, the report’s harsh findings suggest that the committee is laying the groundwork for a stiff punishment for Mr. Monserrate, possibly even his expulsion.

Monserrate has refused to appear before the committee, probably sealing his fate. Stunning LGBT activists, last month the Queens Democrat voted against marriage equality, despite his previous promise of support. Adding assholery to injury, he later complained that just because he slashed his girlfriend’s face, causing 40 stitches, he should be allow to see her: “Two adults who are consenting and who are like-minded and within their mental capacities should be allowed to be with each other. I think it’s an outrage.”