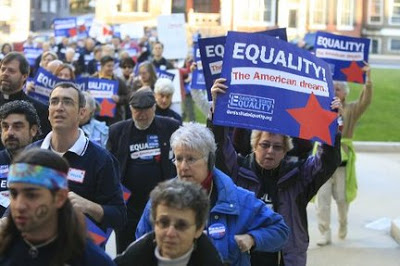 After a month of dithering, it appears that the full NJ Senate will vote on marriage equality next week. The announcement came to the cheers of hundreds of LGBT activists gathered at the state house in Trenton.

The New Jersey gay marriage proposal will be considered Monday by a Senate committee and could be posted for a full senate vote later in the week, state Sen. Ray Lesniak said today. “On Monday in the Judiciary Committee, we’re going to vote on marriage equality,” Lesniak (D-Union) said, while making the announcement to a crowd of gay marriage supporters on the Statehouse steps today. “On Thursday the full Senate is going to vote on marriage equality,” said Lesniak, a member of the Senate Judiciary Committee.” And God be willing, we’ll have 21 votes.” Democratic officials previously said they would not put the legislation to a vote unless they had the support needed to pass it. Senate President Richard Codey later confirmed that the full Senate will vote on the measure on Thursday. About 650 people came here today in support of the bill’s passage. At least a dozen same-sex marriage opponents, mainly a group of Orthodox Jews from Lakewood, held a counter protest at the Statehouse.

It remains unclear on when the issue will be brought before the state Assembly. Outgoing Gov. Jon Corzine has just over a month left in his term. Jersey peeps: Contact your state reps NOW via this easy-to-use contact sheet at Garden State Equality.