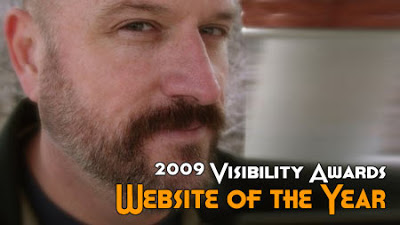 A Nice Mention From AfterElton.com Entertainment/pop culture site After Elton has given JMG their 2009 Visibility Award as their “Website Of The Year.” Very nice!

Like a little whiskey in your coffee and personality in your blog? JoeMyGod.com started out as an ever-changing Manhunt profile of cheeky observations that eventually started developing a following of its own, and became a full-fledged blog in March 2004. Author Joe Jervis, you have many fans among our staff.

Honorable Mention: You know you’re living in screwy times when you’re not sure if even the most bats**t insane rantings are real or satire – which is, of course, exactly the point of Christwire.com, some of the most insightful parody of anti-gay attitudes that we’ve seen in ages. And let’s not forget Andy Towle over at Towleroad.com, especially now that (curse him!) he’s even started blogging on the weekends!

Visibility Awards also went out to Hair (Best Musical Event), the story writers of One Life To Live (Men Of The Year), Tom Ford’s A Single Man (Movie Of The Year), Adam Lambert (Musician Of The Year), Modern Family (TV Comedy Of The Year), and Jon Stewart (Straight Ally Of The Year.) My thanks to the team at After Elton!