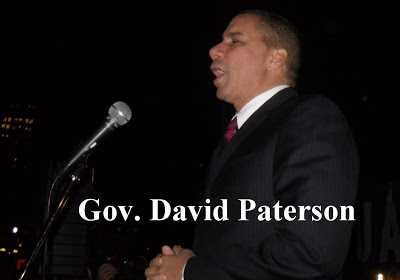 A crowd of over one thousand attended tonight’s rally in NYC’s Union Square, where Marriage Equality NY provided a roster of the state and city’s top political leaders and activists, all of whom vowed revenge upon the 38 state senators that voted against equality.

Throughout the crowd and from the stage, threats of retribution rained down on the “Hate 38,” the Senators that voted against equality. Particular scorn was heaped upon the eight traitorous Democrats, whose faces adorn many placards and who were named and shamed from the microphone. Hearty cheers went up whenever our new heroes like Sen. Ruth Hassell-Thompson were mentioned. The crowd was instructed about the coming 2010 elections and the NYC seats now in everyone’s crosshairs. The evening was definitely not another useless venting of rage, as these things are often characterized.