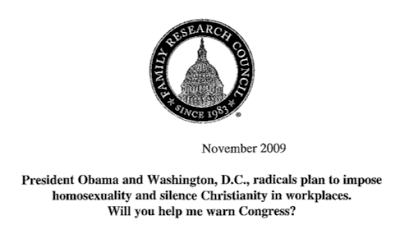 From a four-page letter (PDF) from the Family Research Council’s Tony Perkins to their members….

*The government prosecuting a small business owner — perhaps a Christian bookstore — for declining to hire an open-homosexual or cross-dresser.
*Your employer telling you to remove the Bible from your desk because it is offensive to the homosexual or cross-dresser he was forced to hire.
*Your church being forced to choose between hiring a man who dresses as a woman to work in the Mother’s Day Out or preschool program or facing federal investigation.
*Your teen coming home from his faith-based summer camp and telling you his councilor was an openly-practicing homosexual.

Unimaginable, you say? The government can’t force churches to do that, can it?

It can — if ENDA becomes law.

Think Progress ticks just a few of the lies.

In the body of the letter, which was signed by FRC President Tony Perkins, Rep. Tom Price (R-GA) is quoted as saying that ENDA legislation would mean that “the federal government would be dictating to religious institutions and organizations whom they must hire.” The letter also claims the law could lead to an “employer telling you to remove the Bible from your desk because it is offensive to the homosexual or cross-dresser he was forced to hire.” These claims are ridiculous. Despite what Price says, the legislation would not force anyone to be hired. It would only mean that it would be illegal “to fire, refuse to hire, or fail to promote employees simply based on sexual orientation,” as it is currently illegal to do in cases of race, color, religion, sex, or national origin. Additionally, as the Human Rights Campaign points out, current ENDA legislation “exempts small businesses, religious organizations and the military.”

And the Liars For Christ™ continue their shameless campaign.