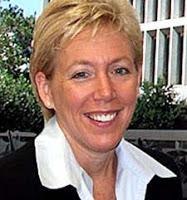 Proposition 8 and Yes On 1 (Maine) campaign manager Frank Schubert has a domestically-partnered lesbian sister with two kids, not that he cared about his own family when he went about wrecking and ridiculing the lives of gay people. The Bay Area Reporter notes that Anne Schubert is now running for Superior Court judge in Sacramento, but she says that campaign rules prevent her from commenting on Prop 8 or her rotten brother.

“Because I am running for a judicial seat, I am bound by the California Code of Judicial Ethics. This code applies to both sitting judges and attorneys running for judicial office,” Anne Marie Schubert said in an e-mail. “This code makes it clear that ‘Candidates may not make statements that commit the candidate with respect to cases, controversies, or issues that could come before the courts.’ This code also states, ‘Judges involved in judicial campaigns must also avoid comment concerning a matter pending or impending in any court.'”

Frank Schubert says that of course he loves his sister and her family. Funny way to show it, fuckweasel. Watch out, Anne – he’ll be coming after your domestic partnership next.