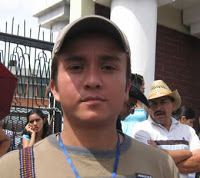 Doug Ireland reports that Honduran LGBT activist Walter Trochez was assassinated in his home country over the weekend.

Walter Trochez 25 years old, a well-known LGBT activist in an active member of the National Resistance Front against the coup d’etat there, was assassinated on the evening of December 13, shot dead by drive-by killers. Trochez, who had already been arrested and beaten for his sexual orientation after participating in a march against the coup, had been very active recently in documenting and publicizing homophobic killings and crimes committed by the forces behind the coup, which is believed to have been the motive for his murder. He had been trailed for weeks before his murder by thugs believed to be members of the state security forces.

Trochez had recently published an editorial decrying the human rights violations of the ruling regime, which has murdered at least 18 other LGBT citizens.