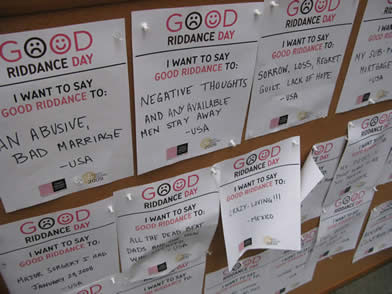 Yesterday was Times Square’s annual Good Riddance Day, in which the public was invited to “say goodbye to all those bad memories of 2009.” Posted “good riddance” messages and items were ceremoniously shredded and hauled away.

On the positive tip, the Times Square Alliance is also hosting a New Year’s Eve Wishing Wall, where your posted dreams and desires for 2009 will also be shredded, but this time to be turned into confetti that will be showered down on the estimated two million attendees of the ball drop at midnight. A sampling of last year’s messages from visitors from around the world is here.