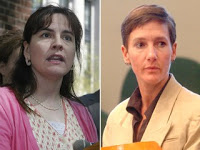 “Ex-Gay” Lesbian Lisa Miller Still In Hiding With Her Daughter Lisa Miller (left) has until tomorrow to hand her daughter Isabella over to her ex-partner Janet Jenkins and nobody is saying where they are hiding, especially not the anti-gay Liberty Counsel, Miller’s attorneys, who appear to be complicit in Isabella’s kidnapping.

“She does not know where her daughter is and she is trying to find her,” Sarah Star, an attorney representing Jenkins, told ABCNews.com. Star says Jenkins last saw her daughter in January 2009 and spoke with her in March 2009. In his custody ruling, Vermont Family Court Judge William Cohen said nobody has “seen or heard from” Miller and Isabella since Nov. 20. The judge ordered custody to be switched from Miller to Jenkins after Miller repeatedly failed to allow visitation for her former partner. An assistant to the lawyers representing Miller, Mathew Staver and Stephen Crampton, told ABCNews.com that the lawyers were “on vacation and unavailable for comment on the matter.” A Facebook page seemingly set up by Miller appears to show the last posting from the mother being on Dec. 4.

The Protect Isabella Coalition is screaming “judicial tyranny.” Here’s a clip they made earlier this year, before full custody was awarded to Janet Jenkins.