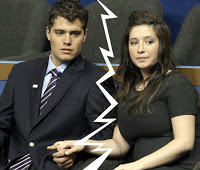 Sarah Palin’s whore daughter is suing her baby daddy for custody of their bastard son. And the Palins didn’t want anybody to know about it.

A Dec. 23 order from Judge Kari C. Kristiansen denied Palin’s motion to close the proceedings and opened the case file to public access, while an order issued the same day by Presiding Judge Sharon Gleason denied Palin’s request to use John and Jane Doe in place of Johnston’s and her own real names. On Nov. 4, Palin filed for sole custody of Tripp Johnston-Palin, the former couple’s son, who celebrates his first birthday today. Kristiansen initially issued temporary orders limiting access to the case file and allowing the parties to file under pseudonyms. Johnston wasn’t playing along, however. In an opposition to Palin’s motion for a gag order, Johnston’s attorney, Rex Butler, said: “Simply put, this matter is public in nature, the courts are not refuges for the scions of the elite to obtain private dispensation of their legal matters because the public at large has an interest in the proceedings.”

There’s another factor in the mix, of course: Palin’s mother, former governor Sarah Palin, with whom Johnston has repeatedly locked horns in the press, and from whom he claims to fear retaliation. “I do not feel protected against Sarah Palin in a closed proceeding,” Johnston said in an affidavit accompanying Butler’s filings. “I hope that if it is open she will stay out of it. … I think a public case might go a long way in reducing Sarah Palin’s instinct to attack and allow the real parties in this litigation, Bristol and I, to work things out a lot more peacefully than we could if there is any more meddling from Sarah Palin.”

You know this is the Rogue One’s doing, retaliating against Levi for those horrible, totally true, things he’s said about her.