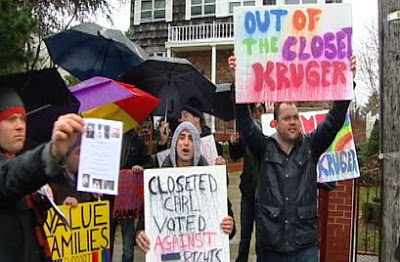 Activists are turning up the heat on the eight Democratic New York senators who voted down same-sex marriage. Yesterday’s actions including a protest at the Queens office of Sen. Hiram Monserrate and a similar event outside of Sen. Carl Kruger’s Brooklyn home.

Minutes after the vote earlier this month, the unmarried Kruger, whose aide says the Senator “doesn’t comment on his personal life,” was accosted by activists Corey Johnson and Allen Roskoff in the halls of the Albany state house. Johnson and Roskoff “stunned onlookers” by publicly accusing Kruger of being secretly gay. The senator scurried away without responding.