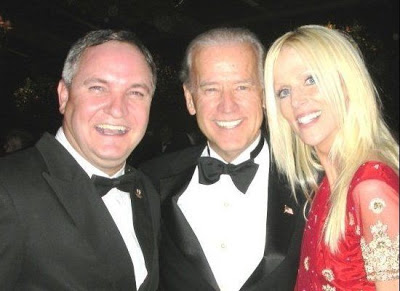 The two aspiring cast members of The Real Housewives Of Washington DC who crashed the White House state dinner may face criminal charges.

Tareq and Michaele Salahi, the couple who crashed the White House state dinner, may face criminal charges, the Secret Service announced today. Jim Mackin, the agency’s spokesman, said this is one reason the Secret Service has kept mum about what happened when the couple, who are auditioning for the Bravo reality show “The Real Housewives of DC”, arrived at the security checkpoint Tuesday. They were not on the guest list for the dinner honoring Indian Prime Minister Manmohan Singh but managing to get into the party, where they posed for photos with Vice President Joe Biden and Chief of Staff Rahm Emanuel. “As this moves closer to a criminal investigation there’s less that we can say,” Mackin said. “I don’t want to jeopardize what could be a criminal investigation. We’re not leaving any option off the table at this point.” It was not immediately clear what charges would be pursued. The Salahis lawyer, Paul Gardner, posted a comment on their Facebook page saying, “My clients were cleared by the White House, to be there.” He said more information would be forthcoming.

Conservative and wingnut sites nationwide are howling about the Secret Service’s failure to properly identify the event’s attendees. Many are pointing to the couple’s Arabic-sounding names as evidence of some kind PC bias that prevented the Secret Service from singling them out for attention.