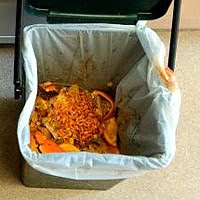 Study Claims Americans Waste 40% Of The Food That They Purchase A new study that measures the amount of the American food supply and what is actually eaten claims that we throw out 40% of the food we purchase.

U.S. residents are wasting food like never before. While many Americans feast on turkey and all the fixings today, a new study finds food waste per person has shot up 50 percent since 1974. Some 1,400 calories worth of food is discarded per person each day, which adds up to 150 trillion calories a year. The study finds that about 40 percent of all the food produced in the United States is tossed out. Meanwhile, while some have plenty of food to spare, a recent report by the Department of Agriculture finds the number of U.S. homes lacking “food security,” meaning their eating habits were disrupted for lack of money, rose from 4.7 million in 2007 to 6.7 million last year. About 1 billion people worldwide don’t have enough to eat, according to the World Food Program. The new estimate of food waste, published in the journal PLoS ONE, is a relatively straightforward calculation: It’s the difference between the U.S. food supply and what’s actually eaten, which was estimated by using a model of human metabolism and known body weights. The result, from Kevin Hall and colleagues at the National Institute of Diabetes and Digestive and Kidney Diseases, is about 25 percent higher than similar estimates made in recent years.

A different study by an international group last year estimated American wastage at 30%, noting that the world food supply is ample enough to feed everybody.