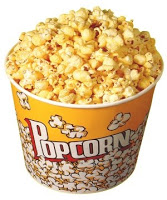 Shocking Report Shows That Buttery Food And Soda Is Fattening According to the Center for Science in the Nanny State, everybody should stop eating movie popcorn immediately.

CBS reports on a study by the Center for Science and Public Interest that analyzed nutritional makeup of movie popcorn; the results are eye-opening. Consuming a medium size popcorn and soda is the equivalent of eating three Quarter Pounders from McDonald’s, along with 12 pats of butter. The concessions from Regal, the country’s biggest movie chain, have 1,160 calories and three days worth – 60 grams – of fat. Regal said that the medium popcorn had 720 calories and the large had 960, but CSPI’s tests found those numbers to be understated. A small popcorn at Regal had 670 calories – the same as a Pizza Hut Personal Pepperoni Pan Pizza. Even if you share a small popcorn – it’s still about a day’s worth of saturated fat per person, according to CSPI.

They’ll get my buttered popcorn when they pry it from my cold dead artery-clogged hands.