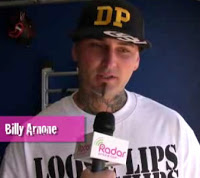 Quote Of The Day – Billy Arnone “If they were put in front of me I’d probably watch it.” – Billy Arnone, the brother of Miss Ladyfingers USA, telling Radar Online that he’d watch her sex tape. What IS it with that family? (And note Billy’s “Loose Lips” t-shirt.) He goes on to slam same-sex unions, saying, “I’m all the way against gay marriage. I don’t feel that it’s right that a man and a man should raise a kid. That’s just how I was raised and how Carrie was raised. We’ll stick by that ‘til the day we die.” So hate IS a family value.