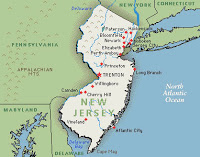 A just-released poll shows that New Jerseyans support marriage equality, but only by a slim majority.

The poll, conducted between Nov. 6 and 10, found 46 percent of adult residents want to extend the right to gay couples while 42 percent oppose it. Still undecided were 12 percent of respondents. “While this tests opinion outside the intensity of a campaign to ban gay marriage, as occurred in California, there is more of a ‘live and let live’ attitude in New Jersey than in many other states that have dealt with this issue,” said David Redlawsk, director of the Rutgers-Eagleton Poll and professor of political science at Rutgers University. The results come out as the Legislature contemplates the issue in the last weeks before Gov.-elect Chris Christie takes office in January. The legislature begins its lameduck session early next week. If lawmakers pass the bill legalizing gay marriage, 52 percent would accept the new law, while 40 percent would support a constitutional amendment banning it, the poll said. “There will be a strong reaction from opponents, but for the most part, opponents actually see this as a less important issue than do supporters,” said Redlawsk.

That’s what they tell pollsters, but the Bradley Effect has taught us otherwise lately.