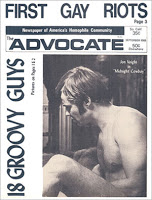 On The “Death” Of LGBT Print Media Over on Mediaite, Michael Triplett of the National Gay & Lesbian Journalists Association covers the demise of the Washington Blade and other LGBT print titles and what physical gay newspapers have meant to us.

Like other “minority” media, it is easy to underestimate the significance of the LGBT press for the gay community. For many of us, it was the first glimpse into what it meant to be gay or lesbian or bisexual or transgender. We opened up those newspapers tentatively, almost afraid of what we would discover about ourselves and the world around us. We turn to the LGBT press to find out what’s happening on our street, to find a church, to find a lawyer, and even find a boyfriend or girlfriend. I remember poring over the pages of personal ads in the mid-70’s Advocate and After Dark, wondering what expressions like “French passive” could possibly mean and why so many of these men described themselves as “artistic” or “generous” – all while recoiling from the quarter-page ads featuring handsome men modeling black sheer harem pants and padded butt and crotch-enhancing underwear. Was I going to have to dress like that? But at the same time I thrilled to the bar and disco ads with their thinly-coded descriptions of dance floor and dark-room shenanigans. To my embarrassment, I don’t recall being particularly interested in the actual writing – that vital reporting of the brave, scary, heady days of our then young movement. Instead, I would memorize the address of places like Uncle Charlie’s – you know, just in case I made a wrong turn between Algebra 2 and the cafeteria and found myself in lower Manhattan. In the above-linked article, Triplett discusses what the loss of these writers and reporters may mean for blogs like this one. The irony of the fall of the Advocate and the Blade is that LGBT journalism is booming, at least when it comes to citizen journalism. From Pam Spaulding’s Pam’s House Blend and John Aravosis’ AmericaBlog to Andy Towle’s Towleroad and Joe Jervis’ JoeMyGod, LGBT voices are everywhere in the political and LGBT blogosphere. This citizen journalism takes many forms, from the progressive political coverage by Spaulding and Aravosis to the popular coverage by Towle and Jervis that mixes pictures of Levi Johnston in Playgirl and 80s disco videos with news about Proposition 8 and hate crimes. But the constant thread is that they rely on the mainstream press—and legacy LGBT media—to keep their operations running. They rely on reporters like Kerry Eleveld, the Washington correspondent for the Advocate, and Lou Chibbarro Jr. and Chris Johnson of the Blade to cover the ins-and-outs of the LGBT agenda at the White House and Congress.

He’s completely right, of course. I have greatly depended on the timely and found-nowhere-else reporting of the Washington Blade and Advocate. Any loss of original reporting by the LGBT press means less content for this here website thingy, or at the least, less content provided with the unique gay perspective.

While I occasionally write for print LGBT publications, most of my original writing here on JMG tends to be event coverage (rallies, marches, protests, vigils, etc) or items about my personal life that I (perhaps solipsistically) think might be interesting or relevant. With diminished hard news coverage from real gay reporters, this or any LGBT news blog will suffer – how much it will hurt remains to be seen. It worries me.