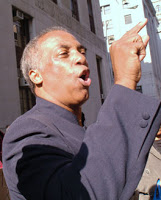 NYC Councilman Charles Baron is gunning to unseat Speaker Christine Quinn, saying it’s long overdue for the city to have a person of color in the job, perhaps overlooking that the openly lesbian Quinn is also a minority.

“I would be an excellent speaker,” Charles Barron, the Democratic councilman from Brooklyn said today, and if another person of color doesn’t run against Christine Quinn in January, he will. “We need someone to be a check on the Mayor, not a deputy mayor,” he said over the phone Thursday afternoon, pointing out that the speaker and the chairs of the two most powerful committees, land use and finance, have been “exclusively white.”

After Tuesday’s election, whites are now a 27-24 minority in the 51-member City Council, a first for NYC. According to Baron, if the black city council members “band together,” Quinn’s ouster is assured. Four council members, including Quinn, are openly gay -the most ever.