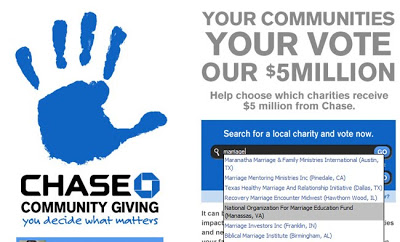 Chase Bank is running a holiday contest on Facebook in which readers can vote for which charities should get a chunk of Chase’s $5M donation fund. Among the list of anti-gay (and gay-friendly) groups is NOM. Queerty notes that the drop-down menu of charities probably came from a “standard non-profit database provider, without much editing on Chase’s part.” But also pointed out is that NOM violates Chase’s own policy that groups that discriminate on the basis of sexual orientation (among other things) are not eligible for the contest. Click over to Facebook and help keep the haters out of the dough. You can also email Chase to request that they review the charities that they have on their list: [email protected]

Previous Hollywood Vs. New York City
Next Caption This