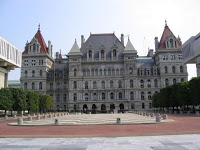 Over at Gay City News, Paul Schindler has written an inside look at the negotiations to get the state senate to agree to a marriage equality vote before the end of the year. The Empire State Pride Agenda’s Alan Van Capelle and openly gay Sen. Thomas Duane remain optimistic that “the votes are there.”

“For the very first time, we have an historic commitment from the Senate majority to bring the bill to the floor,” Van Capelle told Gay City News the morning after the announcement. “I believe that we had the votes to pass the bill in June. I believe if it had been debated last night we would have had the votes.” Others echoed Van Capelle’s assessment of the significance of Tuesday evening’s announcement. “I would say that what it means is that there is almost a certainty that the marriage equality bill be voted on imminently,” said Marty Rouse, national field director for the Human Rights Campaign, which was also represented at the Paterson meeting. Agreeing with ESPA’s handicapping of the bill’s chances, Rouse said, “We’ve talked to our legislative allies, and our understanding is that the votes will be there when the vote comes to the floor.” Senators also voiced satisfaction, with Duane telling Gay City News, “I feel very happy, very positive.”

However NY1 has today posted a recap of likely votes and it doesn’t look good.

While the vote is all but guaranteed, the bill’s passage is anything but. A NY1 tally of lawmakers shows support for same sex marriage is not even half way there. Of 62 senators, 21 are supportive. The remaining 41 are opposed, wouldn’t say, or couldn’t be reached Wednesday, a state holiday. Proponents admit some of the 30 Republicans will be needed. A spokesman for the GOP conference says none are publicly supportive. Opponents like New Yorkers for Constitutional Freedoms Executive Director Jason McGuire say they have reason to be concerned at the polls, referencing a socially moderate Republican pushed out by a conservative in a recent congressional contest upstate. “No senator wants to be the next Dede Scozzafava and lose their seat because of the issue of marriage,” McGuire said. On the other side, there’s political heft for supporters facing a tough vote. Generous campaign contributions from gay rights supporters helped return Democrats to senate power for the first time in more than four decades.