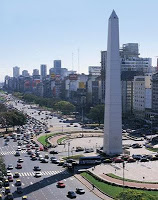 After a gay couple won their lawsuit charging that a city law banning same-sex marriage was illegal, the mayor of Buenos Aires says he won’t challenge the court’s ruling, bringing marriage equality to the capital of Argentina.

The court ruled that two articles in the city’s civil code that say only people of different sexes can get married are illegal. The court decision applies only to Buenos Aires. Same-sex unions in most of the rest of Argentina remain illegal. The legal challenge was initiated by a gay couple, Alejandro Freyre and Jose Maria Di Bello. Judge Gabriela Seijas ordered the city’s civil registry department to honor their union. “The law should treat each person with equal respect in relation to each person’s singularities without the need to understand or regulate them,” the judge said in her ruling. The city code prevents people from “enjoying the rights that couples who enter into matrimony are entitled to,” she said. Those rights include inheritances, pensions and the ability to make decisions for the other person when he or she is incapacitated. Macri called the ruling a “very important step,” adding that “we have to live together and accept reality. … The world is headed in that direction.”

And soon, our own nation’s capital! Congratulations Alejandro and Jose!