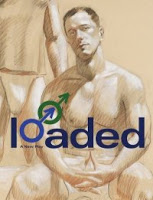 Yesterday I joined the Farmboyz, Little David, Eric Leven, Wayne Hoffman and his partner for a matinee of Loaded, a new play by Elliot Ramón Potts that ran for five shows at the NYC LGBT Center back in January and opened this weekend Off Broadway at the Lion Theater. I went in knowing nothing more than the show’s title, certainly not expecting a verbose 90 minute exploration of misogyny, HIV, barebacking, and gay activism – all intertwined with the complexities and expectations of the two very attractive cast members’ daddy/boy fuck buddy relationship.

Perhaps unsurprisingly, I strongly identified with the older man’s philosophies and I could almost hear Father Tony’s eyes rolling whenever the character said something I’ve said to Tony many times. More than the above cited subject matters, the play is a sharp examination of the gulf between gay men of the plague years and the priorities of today’s young gay men. The acting is terrific. Highly recommended. Loaded runs six shows a week at the Lion Theater at Theater Row on W.42nd. Get tickets here. Facebook page here.