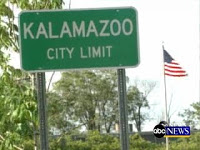 Kalamazoo By A Mile The final result of last night’s vote in Kalamazoo is in. It was 62-38.

Kalamazoo city voters decisively adopted an ordinance Tuesday that extends anti-discrimination protections to gays, lesbians, bisexuals and transgender individuals. The ordinance passed 7,671 to 4,731, making Kalamazoo the 16th city in Michigan to adopt such a gay-rights ordinance that grants the protections in the areas of employment, housing and public accommodations.
ordinance.jpgAllison Downey, center, and John Austin, right, both of Portage, erupt in cheers at the Metro Night Club, 411 N. Westnedge Ave., after the announcement that the anti-discrimination ordinance passed Tuesday evening. “This is for our friends because we love them,” said Downey. Both Downey and Austin volunteered for the One Kalamazoo campaign, which supported the ordinance. The ordinance was approved in all but three of the city’s voting places. It also passed among heavy absentee ballot voting. “There’s a lot of people who will wake up and breathe easier tomorrow knowing they won’t be fired or kicked out of their homes for being gay, lesbian or transgender,” said Jon Hoadley, campaign manager One Kalamazoo, the pro-ordinance campaign committee. “It was astounding the overwhelming support that we had. Kalamazoo said this is what it wants.” Kalamazoo resident Larissa Dugas said she cast her ballot for the ordinance, which she called largely symbolic. “It is symbolic to have people stand up and say that we won’t stand for intolerance,” Dugas said. “It’s important for this to be an inclusive community.”