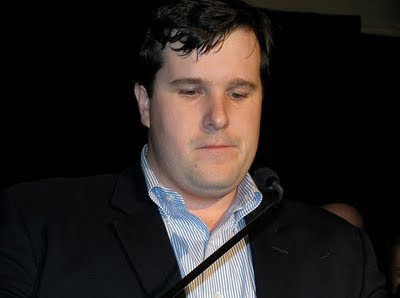 “Tonight, hundreds of thousands of Maine voters stood for equality, but in the end, it wasn’t enough. I am proud of the thousands of Mainers who knocked on doors, made phone calls and talked to their family, friends and neighbors about the basic premise of treating all Maine families equally. And I’m proud of this campaign because the stories we told and the images we shared were of real Mainers — parents who stood up for their children, and couples who simply wanted to marry the person they love.”

“We’re in this for the long haul. For next week, and next month, and next year — until all Maine families are treated equally. Because in the end, this has always been about love and family and that will always be something worth fighting for.” – No On 1/Protect Maine Equality head Jesse Connolly, as reported by Rex Wockner.

As I said last night, Connolly and his team were simply outstanding, putting out the best equality campaign we’ve ever seen. They put actual LGBT people in their ads. They knocked on doors from one end of Maine to the other, engaging voters face to face. And their phonebanking effort ran around the clock until the very last minute. But in the end, it simply was no match for the outrageous and consistent lies and scare tactics of NOM, Stand For Marriage, and the Catholic Church. Unlike what we saw with Prop 8, this time we really cannot fault our side. We all owe Connolly and his team of volunteers our gratitude for a valiant effort.