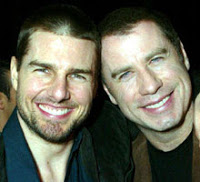 Butch Cassidy and the Sundance Kid, the classic 1969 western often cited for its homoerotic undertones, is going to be remade by the two Hollywood stars most frequently rumored to be gay. Add Scientology into the mix and you get….huh?

Tom Cruise will reportedly team up with pal John Travolta in a remake of the 1960s western Butch Cassidy and the Sundance Kid. The surrogate father of Scientology plans to produce the remake through his United Artists Studio and is currently in talks with scriptwriters, a new report claims. A source tells The Daily Mirror: “Butch and Sundance is a labor of love for Tom. He was eight years old when he saw the original and it made an impression that has stayed with him all his life. He can’t wait to get to work.” Tom hopes to revive the role of Sundance–played by Robert Redford in the original film–while 55-year-old John is expected to play Cassidy. The 46-year-old star even got the blessing of Paul Newman – who originally played the role of Cassidy in the film about a pair of lovable bank robbers–before he died of lung cancer last September, tattles tell the tab.

I wonder if they’ll re-do the scene where Butch and Sundance ride the same horse all day.