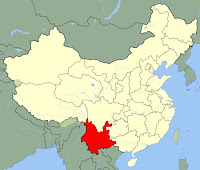 The Chinese government is opening a gay bar in the Yunnan province in order to help stem the country’s rising incidence of HIV/AIDS.

The bar for gays will open tomorrow, World AIDS Day, financed by public funds to the tune of 120,000 yuan ($17, 576), the Beijing News said, offered by Dali Prefecture government, and is to be run by The Good Friend Center, a non-governmental organization for gay men. Yunnan has the highest number of HIV/AIDS cases in the country, official data indicates. Zhang Jianbo, the bar’s manager, told the Global Times that the bar will not be operated for merely commercial purposes but rather serve as a platform to raise awareness of its gay clients about safe sex practice among them. “We might not even sell beverages in the bar. We will turn the bar into a tribune to offer lectures and training to gay people in order to reduce AIDS infections among them,” he said. Health Minister Chen Zhu said days ago that homosexual sex among gay and bisexual men accounted for 32 percent of the total HIV/AIDS transmission in China, where sexual transmission was the main cause of the great majority of new HIV/AIDS cases last year.

Is a bar without beverages still a bar? In 2001, China removed homosexuality from its list of mental disorders.