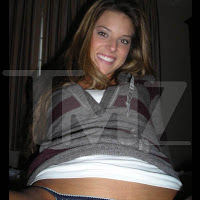 When it rains, it fucking pours Miss Ladyfingers USA’s vajayjay. Radar Online reports that another thirty nude photos and seven solo sex tapes of Carrie Prejean have surfaced. She made “the biggest mistake of my life” at least 38 times!

There are 30 nude photos and eight sex tapes of former Miss California Carrie Prejean, RadarOnline.com has learned exclusively. It’s the most shocking turn yet in a scandal that has continued to follow the woman whose anti-gay marriage stance led to a national controversy and pitted her against pageant organizers. Stripped of her crown, Prejean sued the Miss California USA pageant but reportedly settled after the sex tape surfaced. She called the sex tape the biggest mistake of her life. Now a RadarOnline.com investigation has uncovered that there are SEVEN more “biggest mistakes” of her life – all of them solo performances, just like the one sex tape that the religious beauty queen has admitted to. And there are 30 photos of Carrie, most topless, some showing everything, and most taken by Carrie using her reflection in a mirror.