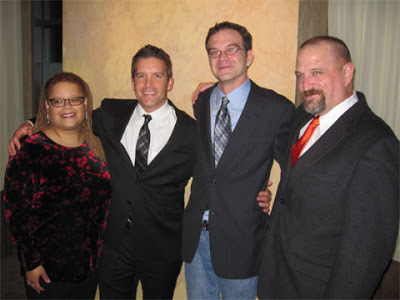 Last night Pam Spaulding of Pam’s House Blend, Andy Towle of Towleroad, and Bil Browning of The Bilerico Project and I attended the NYC Anti-Violence Project’s Courage Awards, where we were honored for our work as “citizen journalists” – a term Pam calls “the glamour word for bloggers, don’tcha know, since we didn’t have PJs on.” We had elected Pam as our spokesperson and here is the speech she made on our behalf after our introduction by SiriusXM host and activist Michelangelo Signorile.

Because crimes against LGBT people are seldom reported on a national basis, and covered mostly in local papers, if at all, we have a valuable opportunity to raise awareness about how severe and widespread these crimes are, and the frequency at which they occur. As one of the few forums, and perhaps the most effective, that exist right now to communicate these crimes to other gay people and our heterosexual allies, we can inspire them to take action.

We will never stop standing up for my fellow LGBT citizens when they are struck down by hate, and never ease the pressure on those who would choose to strike us down, whether by words or by fists. Whether it be a young trans woman in Colorado referred to as “it” by a lover she thought she trusted and struck down in a rage, or a bar goer who beats a gay man with his fist to the surface of a parking lot late at night after a night of drinking in South Carolina, or a man who decides he doesn’t like the look of a lesbian couple in Provincetown so he decides to push them through a plate glass window, or two deadbeats in Laramie, Wyoming who decide to mete justice on a young gay man by beating him and leaving him to die on a frigid fence, we will continue to report each and every story.

We are humbled and challenged by the ability to communicate the amount of information we have regarding hate crimes to such a wide audience, and we will continue to be vigilant in my continuing coverage of violence against the LGBT community. It’s a vigilance that would not be possible without my fellow bloggers Andy, Joe, and Bil. We cast a wide net and I am proud to be honored alongside them.

Pam has lots more photos and videos, including speeches made by co-honoree Tony Kushner, the Pulitzer-winning author of Angels In America, and Kushner’s presenter, Law & Order’s handsome BD Wong. It was a fantastic night. Please consider supporting the important work of the Anti-Violence Project – the people who, in the words of executive director Sharon Stapel, “come to the rescue of LGBT people at the absolute worst time of their lives.”