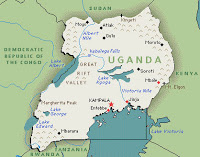 Last month we learned that Uganda, where being gay can already bring a life sentence, was considering a death penalty for homosexual acts in certain situations. The proposed new law is now before Uganda’s parliament.

Life imprisonment is the minimum punishment for anyone convicted of having gay sex, under an anti-homosexuality bill currently before Uganda’s parliament. If the accused person is HIV positive or a serial offender, or a “person of authority” over the other partner, or if the “victim” is under 18, a conviction will result in the death penalty. Members of the public are obliged to report any homosexual activity to police with 24 hours or risk up to three years in jail – a scenario that human rights campaigners say will result in a witchhunt. Ugandans breaking the new law abroad will be subject to extradition requests. “The bill is haunting us,” said Mugisha, 25, chairman of Sexual Minorities Uganda, a coalition of local lesbian, gay, bisexual, transgender and intersex groups that will all be banned under the law. “If this passes we will have to leave the country.”

The bill has been denounced by the Swedish government and by UK Prime Minister Gordon Brown. Canadian Prime Minister Stephen Harper has condemned the bill as well.

Over at Box Turtle Bulletin, Timothy Kincaid and Jim Burroway have been tracking the connection to the bill by American right-wing Christians, in particular by the secretive “Family,” which includes as members prominent GOP politicians like Sen. John Ensign and SC Gov. Mark Sanford. The push for the “kill gays” bill in Uganda is being promoted and funded by the Family. Go to Box Turtle Bulletin for an exhaustive recounting of the ties between Uganda, the Family, and the Christianist right.

Among those with close ties to Ugandans promoting the “kill gays” bill is Saddleback megachurch Pastor Rick Warren, who has hosted many appearance by Ugandan Pastor Martin Ssempa, one of the bill’s leading advocates. Warren has since denounced Ssempa’s extreme anti-gay stance. But yesterday on Meet The Press, Warren refused to distance himself from “kill gays” bill itself, saying, “I never take sides.” Of course, we know differently from Warren’s endorsement of Proposition 8.

What we are seeing in Uganda is a vivid depiction of what some on the Christian right would like to see in America. They are testing the waters there, dipping their vile toes into Uganda’s government, seeing just how far they can take an anti-gay pogrom. Watch closely.