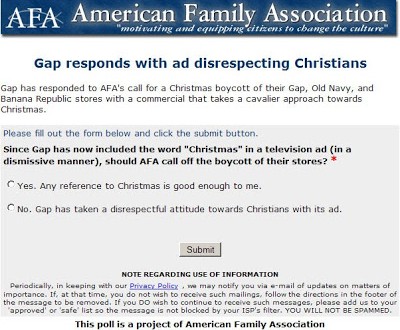 One day after I wondered if Gap’s new holiday ad wasn’t a giant “fuck you” to the American Family Association’s boycott claim that the company was “anti-Christmas,” the AFA has sent out an “action alert” describing the commercial as supporting witchcraft.

Gap has responded to AFA’s call for a Christmas boycott of their Gap, Old Navy, and Banana Republic stores with a commercial that takes a cavalier approach towards Christmas. The video entitled Ready for Holiday Cheer features a group of people dancing and chanting: Two, Four, Six, Eight, now’s the time to liberate
Go Christmas, Go Hanukkah, Go Kwanza, Go Solstice.
Go classic tree, go plastic tree, go plant a tree, go add a tree,
You 86 the rules, you do what feels just right.
Happy do whatever you wanukkah, and to all a cheery night. Go Christmas, Go Hanukkah, go whatever holiday you wanukkah. Did you notice it? Gap compares Christmas to the pagan holiday called “Solstice.” Solstice is celebrated by Wiccans who practice witchcraft! Gap also encourages you to “86” or “dismiss” traditions and “do what feels just right.” Take our Poll! Since Gap has now included the word “Christmas” in a television ad, should AFA call for an end to the boycott of their stores? Previous Did Texas Ban ALL Marriages?
Next Open Thread Thursday