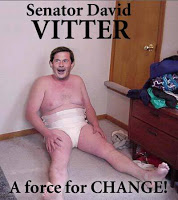 A DC-based watchdog group is demanding that Louisiana’s lawyers association investigate anti-gay Sen. David Vitter for his admission that he committed a “very serious sin” by patronizing the infamous “DC Madam.”

Citizens for Responsibility and Ethics in Washington said its request is related to Vitter’s recent request for a Justice Department investigation into ACORN, the community activist group with headquarters in New Orleans. Staffers in at least four ACORN offices around the country have been caught in a video sting giving advice to a couple pretending to be a prostitute and pimp looking for tax breaks and other assistance. “Sen. Vitter’s zeal to see ACORN criminally investigated for offering advice in setting up a prostitution ring reminded me he has yet to be held accountable for his own role in a prostitution ring,” said Melanie Sloan, CREW’s executive director. “While ACORN’s conduct is indefensible, so is Sen. Vitter’s and what is good for the goose is good for the gander.” Sloan asked the state Office of Disciplinary Counsel to investigate whether Vitter violated the state’s rule of professional conduct that says it is professional misconduct for a lawyer to “commit a criminal act especially one that reflects adversely on the lawyer’s honestly, trustworthiness or fitness as a lawyer in other respects.”

The DC Madam killed herself last year, but not until after she called for Vitter’s prosecution.