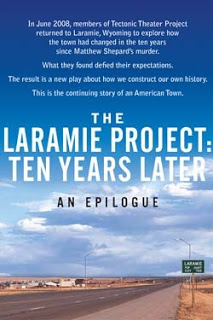 The groundbreaking epilogue to the Laramie Project, titled THE LARAMIE PROJECT: 10 YEARS LATER, will be performed in New York at Lincoln Center and over 150 other theaters across the country on October 12, 2009. The Lincoln Center premiere will feature a pre-show that will be webcast live to the other productions and include guest host Glenn Close, welcoming remarks by Judy Shepard and a post-production Q and A moderated by National Public Radio Arts and Culture correspondent Neda Ulabay.

“We now have over 150 theaters participating in this historic event and are thrilled to be joined by Judy Shepard, Glenn Close and our other special guests at the NY premiere” said Greg Reiner, Executive Director of the Tectonic Theater Project. “The interest and enthusiasm that the epilogue is receiving is very exciting and demonstrates to us the power the Shepard story still holds for people, as part of our collective history and as a lesson to all about homophobia, what is means to be gay in a small town and how stories must be re-told to ensure that the legacy of these kinds of incidents is correct,” continued Reiner. “The Laramie Project: 10 Years Later will engage the audience as did the original, and we expect there will be many who are surprised to learn what Laramie is like a decade after Matt’s murder,” concluded Reiner. The writers of this play are Tectonic Theater Project members Moisés Kaufman, Leigh Fondakowski, Greg Pierotti, Andy Paris, and Stephen Belber.

Tickets to the event at Lincoln Center’s Alice Tully Hall are a very reasonable $100. Get tickets here. Enter to win two tickets by commenting on this post. Only enter once and please remember to leave your email address in the text of your comment. If you cannot be in NYC on October 12th, your winning entry is transferable to another party. Entries close at midnight Wednesday, west coast time. Publicists: If you’d like to take part in Swag Tuesday on JMG, please email me.