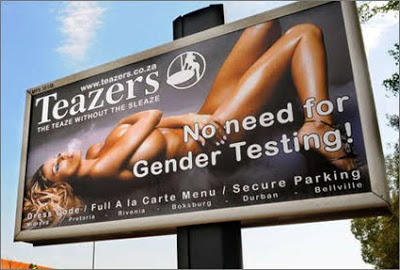 Not surprisingly, the billboard drew complaints, at which Teazers owner Lolly Jackson scoffed at length. He first said the Semenya situation was “the furthest thing from my mind” when he made the ad. Then he added: “I do not want anyone coming here [to Teazers] with the idea that we do not have women. We have women, 100 percent women here. I did a test on them, I am a professional, and they are 100 percent women.” If that didn’t turn people off enough, he then insulted both the advertising watchdog (“a bunch of idiots doing a worthless job”) and the original complainant (“maybe she is fat and ugly”). The watchdog hasn’t acted yet, but I hope they rule against him just to hear his response.