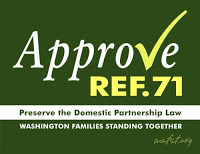 Supreme Court Justice Anthony Kennedy on Tuesday referred to the full Supreme Court a request t0 block the release of names of people who signed petitions seeking to overturn Washington’s new “everything but marriage” same-sex domestic partner law. David Ammons, spokesman for Secretary of State Sam Reed, confirmed that Kennedy had referred the matter to the full High Court but had no further details. Gary Randall of the Faith and Freedom Network, which asked for the stay, said in an e-mail to supporters Tuesday morning: “This is very positive.” Janelle Guthrie, spokeswoman for state Attorney General Rob McKenna, said it’s not uncommon for a justice to refer an application to the entire court. “While they are frequently denied, they are sometimes granted,” she said in an e-mail. On Monday, Kennedy blocked Washington state officials from releasing the names of people who signed petitions to get Referendum 71 on the ballot. Kennedy’s decision stopped a federal appeals court ruling last week that ordered the release of the names. Kennedy said his order would remain in effect while he considers a request by a group that asked him to reverse the appeals court ruling.

As noted above, it remains to be seen whether the Court will accept the case. Of course, if they do agree to hear it, the election will likely be long over.