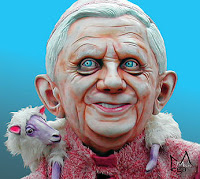 Seizing upon the rift over gays in the Anglican Church, Ill Papa Palpatine has invited gay-haters to join his Super Hate Club.

In an extraordinary bid to lure traditionalist Anglicans en masse, the Vatican on Tuesday announced that it would make it easier for Anglicans who are uncomfortable with their church’s acceptance of women priests and openly gay bishops to join the Roman Catholic Church. A new canonical entity will allow groups of Anglicans “to enter full communion with the Catholic Church while preserving elements of the distinctive Anglican spiritual and liturgical patrimony,” Cardinal William Levada, the prefect for the Congregation for the Doctrine of the Faith, said at a news conference here.

Though both Catholic and Anglican leaders sought on Tuesday to present the move as a more coherent, unified response to those seeking conversion, the Vatican appeared to have announced the move to the Anglican Communion only in recent weeks and as a fait accompli. And many Anglican and Catholic leaders expressed surprise, even shock, at something they said would undermine efforts at ecumenical dialogue and capitalize on deep divisions within the Anglican Church over issues like the ordination of gay bishops and blessing same-sex unions.

The move could have wide impact in England, where large numbers of traditionalist Anglicans have protested the Church of England’s embrace in recent years of liberal theological reforms like ordaining women bishops. These Anglicans, and others in places like Australia, might be attracted to the Roman Catholic fold because they have had nowhere else to go. If entire parishes or even dioceses leave the Church of England for the Catholic church, it will probably set off battles over ownership of church buildings and land.

The above-linked articles speculates about American Episcopalians that “proportionally fewer would be eager to join the Catholic fold” than members of Church of England.