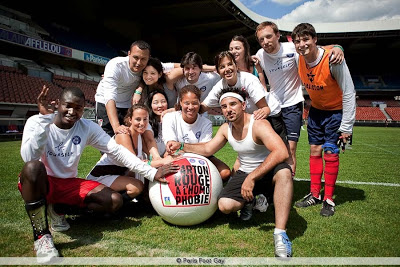 Paris Foot Gay, an amateur gay soccer team has been told by a team comprised of Muslim players that their scheduled game cannot take place due to “religious principles.”

The Paris Foot Gay team says Tuesday it received an e-mail from the Creteil Bebel club canceling a match scheduled for last Sunday. “Because of the principles of our team, which is a team of devout Muslims, we can’t play against you,” the e-mail said, according to Paris Foot Gay. The e-mail received Saturday said, “Our convictions are much more important than a simple football match.” Paris Foot Gay said in a statement that it asked the amateur league to sanction Creteil Bebel.

A spokesman for Creteil Bebel says he’s sorry if “anybody feels upset or hurt.”