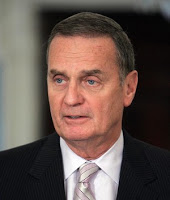 Obama administration national security adviser James Jones said yesterday that the repeal of DADT will come “at the right time.”

“I don’t think it’s going to be — it’s not years, but I think it will be teed up appropriately,” James Jones said. Jones said Obama “has an awful lot on his desk. I know this is an issue that he intends to take on at the appropriate time. And he has already signaled that to the Defense Department. The Defense Department is doing the things it has to do to prepare, but at the right time, I’m sure the president will take it on.” As a candidate, Obama signaled support for repealing the law. To the disappointment of gay-rights supporters, he has yet to made a move since taking office in January. The White House has said it will not stop the military from dismissing gays and lesbians who acknowledge their sexuality. Last year, 634 members of the military were discharged for being gay, or .045 percent of the active-duty U.S. force, according to an Aug. 14 congressional report.

At the right time. Whenever that is.