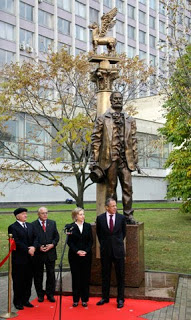 Today Secretary of State Hillary Clinton attended the unveiling of a statue of gay poet Walt Whitman at Moscow State University. But local Russian LGBT activists are disappointed the Clinton did not use the opportunity to denounce the homophobia of the Russian government.

Russia’s leading gay activist said Wednesday that he was disappointed that Secretary of State Hillary Rodham Clinton met with an outspoken foe of gay rights during her two-day trip to Russia and did not decry homophobia in the country. Clinton attended a ceremony unveiling a statue of Walt Whitman at Moscow State University with Russian officials including Moscow Mayor Yuri Luzhkov. Luzhkov has blocked all attempts to hold gay pride marches in Moscow, once saying they “can be described in no other way than as satanic.”

Clinton did not mention of the issue during the ceremony. Some biographers have described Whitman as homosexual and U.S. gay activists have claimed him as symbol of their movement. “Just as Pushkin and Whitman reset poetry we are resetting our relations for the 21st century,” Clinton said. A statue of the Russian poet Alexander Pushkin was erected at George Washington University, in Washington, D.C., in 2000. It was not clear whether Luzhkov was aware of Whitman’s status as a gay icon, and sponsors of the statue said they were honoring Whitman strictly for his contributions to literature.

The State Department says they are unaware of any request by Russian activists regarding the event.