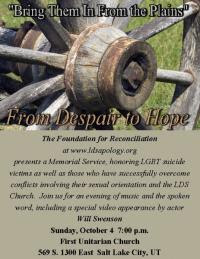 The Mormon Church-owned Deseret News is refusing to run an ad for a memorial service for gay Mormons who’ve committed suicide.

MediaOne, which handles advertising for both the News and The Salt Lake Tribune , accepted payment from the nonprofit Foundation for Reconciliation to run an ad, announcing a memorial service this Sunday, in both papers. But on Wednesday, a MediaOne employee told the group’s Cheryl Nunn that the ad had been rejected by the News. “Anything that’s related to the church we have been asked to present that to [the Deseret News ] and then they decide,” said MediaOne President Brent Low. “This one was directly talking about the church and sexual orientation.”[snip] The foundation’s memorial, “From Despair to Hope,” honors lesbian, gay, bisexual and transgender (LGBT) suicide victims as well as “those who have successfully overcome conflicts involving their sexual orientation and the LDS Church,” the ad states. The event features a video appearance by actor Will Swenson, known for his roles in Mormon-themed films “Sons of Provo” and “The Singles Ward.” Peter Danzig, a Salt Lake City spokesman for the foundation, called the newspaper ad “innocuous.” “There’s nothing anti-Mormon,” he said. “We tried to create an event that would be welcoming to everyone on either side of the issue.”

More about the memorial at LDSapology.org.