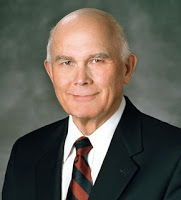 Mormon Leader: The Prop 8 Backlash Is Like What Happened To Blacks In The 60’s On Tuesday, Mormon “apostle” Dallin H. Oaks compared the Prop 8 backlash against the LDS Church to the persecution blacks experienced during the civil rights struggles of the 60’s.

Last year, the Utah-based Church of Jesus Christ of Latter-day Saints urged its followers to donate money and time to pass Prop 8, the successful ballot measure that eliminated the right of same-sex couples to wed in California. Afterward, protests, including several near LDS temples, erupted along with boycotts of business owners who donated to Prop 8 and even some vandalism of LDS meetinghouses. “In their effect,” Oaks said, “they are like the well-known and widely condemned voter-intimidation of blacks in the South that produced corrective federal civil-rights legislation.” Jeanetta Williams, president of the NAACP’s Salt Lake branch, said there is “no comparison.” “I don’t see where the LDS Church has been denied any of their rights,” she said. “What the gay and lesbian communities are fighting for, that is a civil-rights issue.”

A Univeristy of Utah historian retorts: “Were four little Mormon girls blown up in the church at Sunday school? Were there burning crosses planted on local bishops’ lawns? Were people lynched and their genitals stuffed in their mouths? By comparing these two things, it diminishes the real violence that African-Americans experienced in the ’60s, when they were struggling for equal rights. There is no equivalence between the two.”