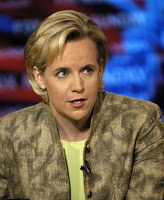 Mary Cheney, spawn of Satan and sister of a birther, is pregnant with her second child.

Mary Cheney, the former vice president’s daughter, and her long-time partner, Heather Poe, are expecting their second child, a source close to the family told True/Slant. [Ed. Note: Since publishing this piece, Cheney has confirmed that she and Poe are expecting their second child in mid- to late November.] Cheney has worked as a principal at Navigators Global, a bi-partisan communications firm, but recently announced that she would be leaving the company for maternity leave and to begin a new consulting firm with her sister, Liz. Close friends were informed that she was expecting a second child about four months ago and she is now visibly showing her pregnancy, the source says.

Cheney was last in the news in August when she donated $1000 to the Senate campaign of former Rep. Bob Portman, who has consistently voted against LGBT rights.

Previous Sparks Fly During CNN’s DADT Debate
Next Once A Quitter….