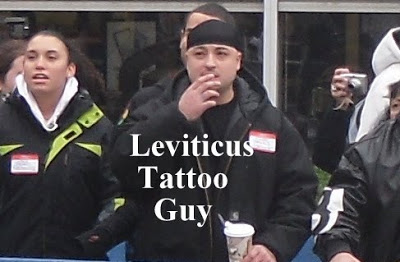 This afternoon the Farmboyz and I traveled to the working-class neighborhood of College Point, Queens, far past the end of subway service, to attend the march and rally in support of gay bashing victim Jack Price. We were a bit concerned that the 90+ minute trek from Manhattan might hamper a strong show of support, but were very pleased to arrive and find about 300 LGBT activists, allies, and supportive locals already on the street near the site of the attack.

After a 15-minute march down College Point Boulevard to the sullen or unknowing stares of locals, we were shocked to find a group of 20 or so counter-protesters, PRO gay bashers, already in a pen perilously close to the park where the rally was to take place. Leading the pro-bashers was Mr. Leviticus Tattoo himself. He and his co-thugs wore stickers in support of the jailed cowards as they shouted “Free Daniel Rodriquez!” and “No hate crime!” Among their signs was “Daniel doesn’t hate gays!” Riiiight. Fortunately, there was a huge NYPD presence on hand and the two groups were not permitted to get closer than shouting distance. Speakers at the rally included the usual folks that show up at these things, something I hate knowing, but do because I’ve now attended so fucking many. We heard from the Queens borough president, City Council Speaker Christine Quinn, Queens activist Brendan Fey, Congressman Anthony Weiner, and City Comptroller and mayoral candidate Bill Thompson, just to name a few. During lulls as the microphone changed hands, the thug pen across the street would take advantage of the momentary silence to renew their chants.

During the speeches, I sought out some locals. One mother pointed her cigarette at the miscreants across the street and rasped, “Them there’s all the troublemakers in this neighborhood, my daughter knows she’s not to associate wit’ a single one of ’em.” An elderly man in a Vietnam-era flight jacket pointed at the hoodlums and told me, “This neighborhood has gone down the toilet because of them there. You just get them punks down in the basement of my VFW, my boys and I will take care of ’em real good. You folks from the city won’t never have to hear from ’em again.”

Another woman spoke to me and Andy Humm of Gay City News, and on the condition of confidentiality, revealed that more young people from College Point would have been at the rally, but feared relataliation from the supporters of the attackers. She also said that the attackers and their friends had been the ones writing the lewd graffitti messages supposedly from Jack Price. “It’s them. I know it’s them. It’s all the same handwriting with the same Sharpie.” I’ll have Andy’s accounting of his interviews with the thugs as soon as Gay City News publishes.

Below is a slideshow of the afternoon, including some shots of the thug pen. I’ve never seen counter-protesters at an anti-bashing rally. I don’t know what it means. It worries me.

UPDATE: Michael K. Lavers at EGDE has posted his report which includes statements from the counter-protesters.