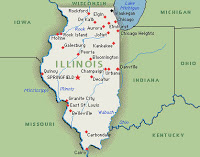 “This is not an issue of sacred versus secular – there are plenty of synagogues and churches that both recognize and perform same-sex marriages,” said Bernard Cherkasov, Chief Executive Officer of Equality Illinois. “Rather, marriage is a civil right – plain and simple. The state cannot have a civil institution of marriage – with its plethora of benefits, rights, and responsibilities – and exclude from it an entire class of citizens.”

The bill would provide for state recognition of same-sex marriage, while ensuing that religious institutions are not required to perform any marriages that inconsistent with their religious practices. This is a companion bill to the one introduced in the State House of Representatives by Representative Greg Harris, HB178. The House bill is co-sponsored by Representatives Deb Mell, Sara Feigenholtz, Constance Howard, Harry Osterman and John Fritchey. Equality Illinois applauds the sponsoring legislators for their leadership.

What chance does this bill have? Illinoisans, weigh in.